“Only those who dare to fail greatly can ever achieve greatly.”

Failure is the path to wisdom and mastery. Viewed differently, failure is bad only for those who brood over it and give up because of it. Why, then, do so many of us hate to fail?

I’ve played hockey my whole life. Yet, I did not step out onto the ice the first time and start gliding around the rink knowing how to skate. When I coach youth hockey I tell my players, “If you’re not falling, you’re not learning how to skate; you’re not stretching yourselves enough to reach the next level.”

I once coached a young man named Joey who was a natural athlete on the soccer field. Because his younger brother played hockey and his dad was head coach, he wanted to give hockey a try. Confident in his athletic ability, Joey was a pleasure to observe. All he required of my coaching was how and where to take risks and keep Dad out of the discussion. By the end of the year, our hockey team won the state championship largely because Joey’s hockey playing skills had grown so rapidly and wonderfully. Joey didn’t fear failure. He approached the game as an experiment, trying new ways of doing things and learning from those attempts that didn’t work. Joey viewed his trials and errors not as failure, but as necessary steps in the process of achieving mastery.

Failure in the workplace can take on many forms. The perceptive leader will catch it in the early stages, recognize its source, and apply what was learned to correct it. Following are just a few examples of failure to be able to distinguish.

While no one intends to build failure into their plan, it nonetheless exists and will show itself if or when you and your team become complacent, which usually results from your success. For this reason, my clients and I have a meeting cadence through which we continue to ask critical questions regarding constraints, opportunities and market relevance. Additionally, we have a survey process called “Net Promoter Score” through which we communicate regularly with customers to know how well we are delivering on our brand promise. We use the Net Promoter Score as an indicator of whether our strategic plan and / or its execution is succeeding or showing signs of failure.

Another way that companies overcome issues of complacency (which lead to failure) is through a concept that software developers coined as “minimal viable product.” It is the reason why you see new mobile devices released without much more than basic essential features and then followed by upgrades nearly every six months. Rather than build failure into a product where development has yet to be perfected, the developers leave out certain attributes knowing that demand is already strong for the available features and benefits. Essentially, customers appreciate the product as it currently exists and are willing to wait and pay for upgrades and improvements in the future.

Minimum viability is not limited to the computer industry. For example, in the 1980s I had been hired as product controller for the construction of the Sheraton Grand Hotel in Los Angeles, CA. When I arrived on the scene, the project was behind schedule and over budget. Not much more existed than a concrete shell. When the day came to open the 500-room hotel, we didn’t wait for all the rooms, ballroom and food and beverage outlets to be finished. Instead, we opened with 150 rooms, one main outlet and a lobby. We continued thereafter to work on the other 350 rooms and fine-dining outlets. In the meantime, we fully booked the finished rooms while adding more rooms to the register each week.

One of the main causes of failure has nothing to do with strategy. Rather, it’s because business owners and leaders fail to understand the correct definition of strategy. They mistakenly believe that strategy has to do with being better. However, strategy has more to do with having a unique set of differentiating activities. When business owners and their teams misunderstand strategy, they fail to pursue a unique position that differentiates their products and services in the marketplace. In the competition to be better, those companies that are not uniquely positioned eventually end up losing in a low-price race to the bottom.

A second type of failure occurs when leaders finally do create a differentiated strategy but then mistakenly assume that customers will automatically beat a path to their door. The most well-conceived product design or strategy is of little value if customers don’t know about it. Unfortunately, most companies do not have well-developed marketing operations to communicate their unique message. In many cases, they do not distinguish at all between the sales and marketing process. Consequently, marketing is ignored, especially if success came easy the first time. Next to complacency, lacking a unique and differentiating strategy along with a marketing process to ‘get the word out’ is the prevalent cause of failure.

No one goes to work to become a failure. No one gets up in the morning excited to let somebody else down. There is no malice in most employees’ hearts. People go to work expecting to contribute and participate. Instead, since most businesses lack a good onboarding process, employees are often left on their own to figure out how best to function. Despite the advancements made in business to date, the onboarding process for new employees of most companies continues to be non-existent, underwhelming or ineffective.

As leaders, our egos can easily get in the way of success. Liz Weisman, author of “Multipliers: How the Best Leaders Make Everyone Smarter,” points out the differences between geniuses and genius-makers. She identifies leaders as either “multipliers,” those who help people grow, or “diminishers,” those who hinder growth. Though our hearts may be in the right place, most of us at times become unintentional diminishers, swooping in to save the day and, thus, robbing people of their learning opportunities. Another, more injurious type of diminisher is the leader who excoriates, hovers and effectively discourages people from trying, ultimately becoming the reason for their disengagement.

In his book “Drive,” author Daniel Pink said, “To motivate people who are in positions that require cognitive thinking, you need to provide three things: 1) a purpose that people can believe in 2) the opportunity to gain mastery and 3) autonomy. When failure is understood as means to achieve mastery, then autonomy can be earned. In such instances, people can use their failures to solve problems and “turn lemons into lemonade.” Leaders/coaches must create environmental conditions, i.e., a culture, where failure can turn into mastery.

Whenever possible, it’s preferable to avoid failure.  My executive coaching clients have a history of winning. Typically, they are not new to business. They’re long past their bootstrapping days and most are 10 or even 30 years into operation. However, at the point where they retain me, something is holding them back. They’ve become stuck. They seek a coach to mentor their team and facilitate their organization into moving forward again.

Together, my clients and I study the marketplace as well as their internal and external capabilities. We look for the “white space” around which to build a strategy and get back on a winning streak.  I advise clients to read “Blue Ocean Strategy,” by Renée Mauborgne and W. Chan Kim to better understand the nuances of creating a strategy that makes competition irrelevant. Their new approach enables them to find a niche in which they are well-positioned to serve customers without having to compete for them. They proceed forward again and continue to succeed.

If your business efforts are failing, whether due to faulty data or market misconceptions, it’s time to evolve your strategy. In “Good to Great,” author Jim Collins recommends forming a mastermind team that meets regularly for the purposes of understanding your industry, customers and technology.

Without fresh perspectives, failure is built in. This is easy to understand when you consider Michael Porter’s Five Forces model of competition which examines who has the better leverage: you (as the product or service provider), your supplier, your customer, or some new entrant? Competitive advantage shifts. It’s important to realize that although you’ve had a successful strategy yesterday or maybe even today, another player may gain the upper hand as early as tomorrow.

Depending upon your perspective, you can grow from failure or let it restrict you. Giving people in your organization the chance to become “A” players and achieve mastery is a choice.  Whether people flourish under your leadership depends greatly on how you view your job of helping them learn from failure. (Are you a multiplier or unintentional diminisher?) Joey used failure as a tool to improve his performance and overall game on the hockey rink to lead his team to the California Bantam ‘B’ State Championship in 1998. Similarly, the leaders on your team can learn to use feedback to fine-tune their processes and coaching. When you motivate people to learn, they continue to grow. Failure then becomes merely a guidepost along the journey toward greater success and mastery. 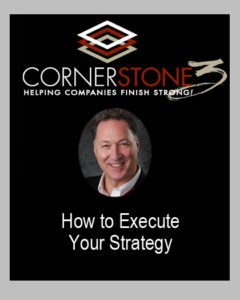